Kaden’s recovery is progressing well. He had the epidural removed today, along with 2 cannulas (IVs). K-man was much happier once these were removed. He has been sitting up even more so as to get his lungs back working well. His pain is being managed very well, and after all that he felt like getting out in the wheelchair to get his remote control car going. Check out the lovely smile in the photo. He even managed to get out and take a few steps upstairs to check out the playground! Way to go Kaden, you are doing so well! Great job, Mum, Dad and family for all your tireless support. xo 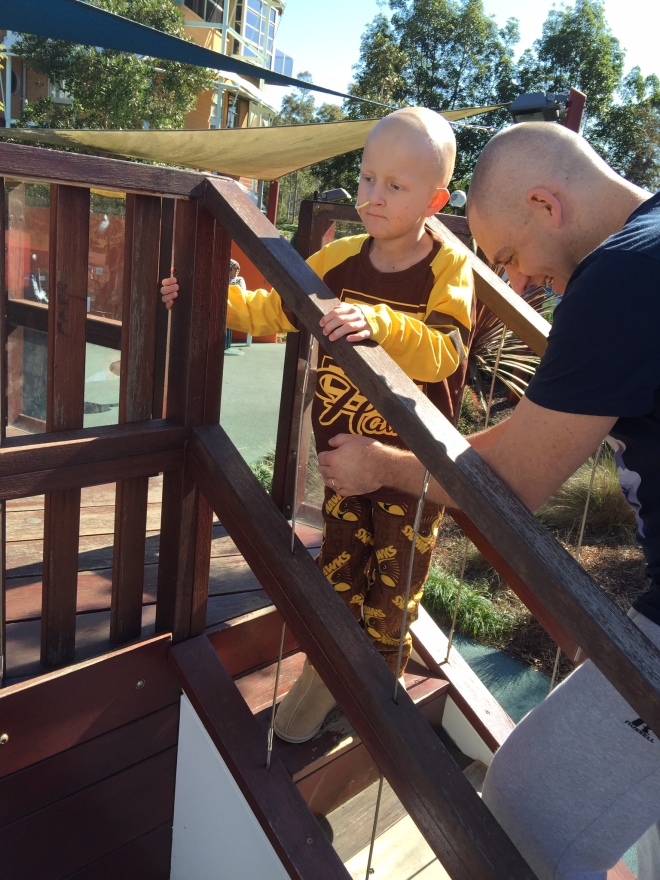 On the 2nd day after his major surgery Kaden was up and sitting in a chair today. Sitting up helps him to expand his lungs and get them strong again. He has been having some extra oxygen to help to train his lungs to full capacity. They are closely monitoring him and his pain is being managed well.

He had a drainage tube removed today, and at this stage the plan is to allow around 7-10 days to recover from the operation, and then another round of chemo. He is continuing to show interest in eating by himself, which is great as this will help him to gain more weight, and not have to rely completely on the tube feeds.

Yesterday’s surgery went very well, and the surgeons are very pleased. As you can imagine, it was a very anxious time for all the family and friends. They removed 2 nodes of cancer from his right lung, and 8 from his left. With that done now, he is now eligible to go onto the transplant list.

His recovery so far has been amazing. Not long after the 4 1/2 hour surgery he was talking to Mum and Dad. He has been a superstar, and this afternoon his was out of the ICU and back into the ward! He asked to have some KFC nuggets – which he hasn’t been able to have. The surgeon gave him the all clear, and so today he enjoyed some nuggets which he hasn’t been able to have for nearly 6 months! What an inspirational little trooper this little man and his family are! 🙂

What an awesome effort by the wonderful doctors, nurses and support teams from both PMH and Westmead Hospitals. Another big step made on the road to Kaden’s full recovery. Great effort everyone, and keep up the fight! 🙂

Yesterday we met with Kaden’s surgeons. What we thought was going to be key hole surgery has now turned out to be major surgery. They will be making an incision on either side of Kaden’s back to access his lungs to make sure there is no living cancer left. If any cancer is found, they will cut it out. Without this operation & confirming all the cancer is dead, the doctors can not put Kaden on the liver transplant waiting list. Once the surgery is completed, Kaden will be placed into ICU to ensure his pain is managed. This operation is booked to take place around lunch time tomorrow.

Due to the change in the lung operation & Kaden requiring a transplant, we will now be staying in Sydney for months instead of weeks!

We are slowly getting our heads around the operation’s & Sydney being our home for a while but like Lee & I say, this is just the next step to getting Kaden healthy & cancer free.

Last week we received a call advising that Kaden’s lungs were clear from the infection previously detected on a CT. They officially gave us the go ahead to fly to Sydney on Sunday. The week has been busy confirming flights, accommodation, medications, feeding bags etc. We will be staying at a self contained apartment across the road from the hospital which we are pleased with, as it will give us some family time together away from the hospital when kaden is well enough to come out.

We have been advised by the liver nurse in Sydney, that they will be conducting tests on Kaden next week, in preparation for a liver transplant. The transplant has still not been confirmed,  however they like to get everything organised just in case this is the path they will take.

Kaden will also be undergoing surgery on his lung on Wednesday, to remove a small dot that has not yet disappeared with chemo. We’re hoping  that this dot will be removed via key hole surgery, so that his recovery is quicker. In preparation for Kaden’s surgery’s, we have been busy helping him to gain weight. He’s been doing a great job on his feeds through the NG tube and also showing interest in eating, this has made Lee and I very happy.

Kaden has had a good time at home. With each day he has been up and about more, as I’m writing this, he is singing which is fantastic, as this indicates that he’s feeling better. He’s enjoyed playing the xbox and watching any cartoon tv series he can get his hands on as well as spending some quality time with his little brother Liam. 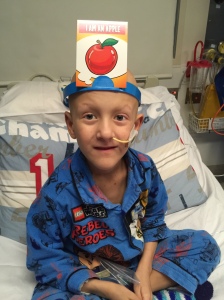 Kaden recently completed round 7 of his chemo. Like previous chemo’s, this round stripped his immune system and he was readmitted back into PMH for 5 days due to a temperature spike.

Since returning home, Kaden has spent a lot of time relaxing and watching movies and TV shows on his Ipad. He has since discovered he has a love of the Pokémon cartoon. He liked Pokémon so much, he requested a trip to the shops to purchase some Pokémon figurines that he now has displayed in his room.

We would like to thank everyone for the ongoing support and gifts that we have received, we are all so very grateful. We have even had some friends shave their much loved hair!

One of the people that shaved his locks is Matt. He arranged to have a fancy dress day and also allowed his mates to colour and shave his hair into all sorts of funny shapes. The day was a huge success with lots of laughs. Thank you Matt for surrendering your locks for Kaden!

A big thank you to Kara and Jordan for also shaving their heads. With funds raised they purchased puzzles, Lego, dinosaur toys and board games, the boys have had a great time playing with the toys and have created some funny looking dinosaurs.

We would also like to thank everyone for the special gifts that have travelled all the way from Melbourne, the smile that it puts on Kaden and Liam’s faces warms our hearts.

This year, Kaden’s teacher Jen, took part in the Perth and HBF Marathons. This is a very long and tiring race that she had been training for quite some time. On completing this race, Jen received two medals, thinking of Kaden and Liam during this race, she decided that upon completion she would give the boys her medals. Kaden, Liam and family would like thank you for this very kind gesture as we understand the strength and determination it takes to complete such a long race.

Kaden has been booked in for a CT next week, from this, the doctors will advise if he is ready to travel to Sydney for surgery. The doctors have not yet confirmed If Kaden will be having a re-section or a liver transplant.