Kaden will continue with his 4th day of chemotheropy treatment today Princess Margeret Hospital in Subiaco, Perth. The plan at the moment is to give him 5 days of chemo, and then take a break. He may even be able to come home for a few days after that!

The poor little man has not been well enough to eat, although he did manage to munch on some arnott biscuits yesterday (see photo). What a trooper! As a result of  not being able to eat very much, he is now being fed his vital nutrients via a feeding tube.

He has various medical teams managing his overall treatment. Through blood tests they have found that he is low on antibodies, and he will be undergoing a blood transfusion at some stage soon.

He has had various visitors, including his past and present school teachers from Meodow Springs Primary School; including the School’s Principal.

Thanks everyone, keep up the fantastic support!

Thanks to everyone who has posted messages/comments of support, they are much appreciated. Keep ’em coming!

Quite a lot has happenned since last Wednesday (18/2/15) when Kaden’s cancer was first diagnosed.

Kaden had a biopsy done on Friday (20/2/15) , where they took tissue from his liver for further examinaton to understand how he can best be treated. During this operation they also placed the catheter/port in his neck for use during his chemotheropy treatment. This operation lasted longer than expected, and was an anxious time for all the family.

After the biopsy, the plan was to send Kaden home for the weekend, and for him to come back on Monday to commence his treatment. Unfortunately Kaden was not very well after the operation, and was in a lot of pain, and was very uncomfortable. Once they managed his pain, he started to feel a little better. However, he was still unwell, and it was also discovered that he had a collapsed lung, and was running a fever! After receiving a dose of antibiotics, and with the loving support of the family, the brave little man is recovering from this.

With no time to was 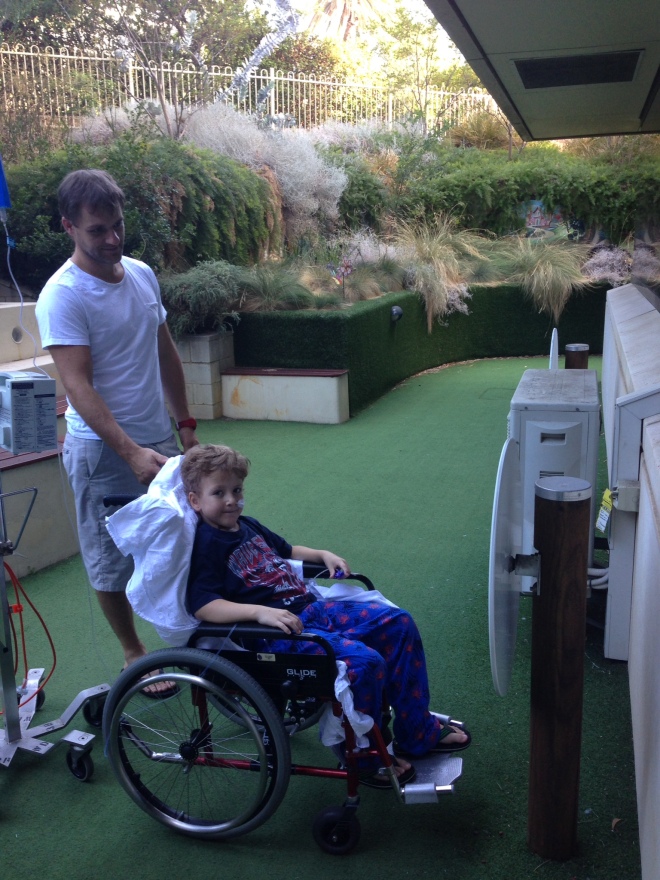 We are still awaiting the results from the biopsy (to understand the exact form of cancer and how it is best to be treated), and have been told that this may take up to 8-10 days.

Attached is a photo a Kaden today with his Dad(Lee), where he managed to get some time outside, and he even managed a smile for the camera!

The family has been completely been completely overwhelmed with donations and positive messages of love and support from people far and wide made through the “mycause” website. At the time of writing this message over 200 donations had been made!

Thanks so much to everyone. This means so much to the family. Please keep those positive messages coming in!

Keep fighting Kaden, we are all right behind you!